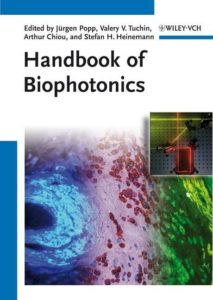 Biophotonics is an emerging multidisciplinary research area, embracing all light-based technologies applied to the life sciences and medicine. The expression itself is the combination of the Greek syllables “bios” standing for life and “phos” standing for light. Photonics is the technical term for all methodologies and technologies utilizing light over the whole spectrum from ultraviolet through the visible and the infrared to the terahertz region, and its interaction with any matter (Figure 1.1).

Beyond this deﬁnition, biophotonics is a scientiﬁc discipline of remarkable societal importance. For hundreds of years, researchers have utilized light-based systems to explore the biological basics of life.

After the invention of the light microscope dating back to the seventeenth century and the systematic improvements introduced by Carl Zeiss, Ernst Abbe and Otto Schott in Jena in the nineteenth century, it became an essential tool in the life sciences and medicine and had a crucial inﬂuence on the work of biologists of this time, such as Ernst Haeckel. Since then, its importance has grown even stronger.

Today, ultrahigh resolving microscopes enable us to observe cellular structures smaller than 20 nm across and their functions, and thus to study diseases right at their origin. We also beneﬁt greatly from photonic technologies in medical practice –in fact both in diagnosis and in therapy of diseases.

For example, laser scalpels have become routine tools which reduce the expense of many surgeries, sometimes even down to an ambulant intervention (“keyhole surgery”). Due to novel photonic technologies such as ﬂuorescence endoscopy and photodynamic therapy (PDT), some types of cancer can be recognized much earlier and treated more gently than several years before.

In ophthalmology, optical coherence tomography (OCT) has become the gold standard for detecting morphological changes in the eye by adding the third dimension, helping to obtain high-resolution 3D images of the retina and diagnose prevalent diseases such as glaucoma and macular degeneration.

The widespread use of biophotonic systems and methods is also reﬂected in
economic terms. Regarding market shares as well as growth rates, biophotonics
belongs to the most important sectors of the global photonics market [1, 2].