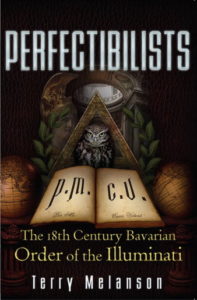 Time and time again, in my research, I have come across references to Adam Weishaupt and the Bavarian Order of the Illuminati. I would go looking for Information only to find very little, let alone any in-depth factual material. With the advent of the Internet, there was a bit more disscusion, but still a lack of substance.

Terry Melanson with his Website ConspiracyArchive.com soon changed hat. Terry, a Canadian, obtained books about the secretive group in French, German and Italien, and began translating, digging deeper from this book to that. His hard work answered many on my questions, while giving unique insight into a fascinating era , the Age of Enlightenment ( along with the reaction against it), which still surfaces today in the factional dynamics, social tensions, and political chicanery of „modern times.“

The dearth of validated material about this secretive group has helped to create a ferociously adaptive „conspiracy-the-ory-the-day“day“ phenomenon, with many employing the Illuminati as their prime covert antagonist, muddying the waters of historiy and creating wakes of disinformation, misinformation, and just plain wrong  Information. This state of affairs that has generally hidden the true nature of the Illuminati, and their place in history.

Not to say that subterfuge, secrecy and shadowy cliques are not part of the deceit that haunts our existence. For too many people close to power have observed that those who sit upon the „throne“ and those who wield its power are not always the same. As Supreme Court Justice Felix Frankfurter observed: „The real rulers in Washington are invisible, and exercise power from behind the scenes.“

Hidden corruption is nothing Unique. What is new is the opportunity we as a Society now have to deal Voith it.

With the personal Computer and the Web, we the people have amazing tools Voith which to explore, educate ourselves about a d even aﬂect the Way the World really Works. My Computer helped to make this book, Terry and Trine Day were brought together by the Internet and it helps us tell you all about it. Such a World!