Evidence of a Primary Perception in Plants 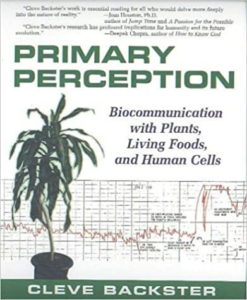 A strange thing happened late one evening–or early one morning, depending on your time reference, on February 2, 1966. Ah! You say that’s when Cleve Backster discovered that plants have emotions. Perhaps.

But there is more to it than that. What you ask? Some presuppositions, as described by Professor Rigden last Thursday evening, of the Scientific community were brought under attack by an individual outside the science establishment.

Mr. Backster has devoted more than 25 years to research in application of the psychogalvanic reflex (PGR) in a variety of behavioral studies. During this time he has earned eminence in the field of polygraph operation. He developed the effective and widely used Zone Comparison Polygraph Technique. He has been associated with the U. S. Army and CIA as a polygraph expert.

He has been an expert witness at a Congressional hearing on polygraph usage in government. He is currently serving on the Board of Directors of the American Polygraph Association. In short, Mr. Backster is a world-recognized authority on the polygraph and polygraph usage.

Quite aside from his technical expertise Mr. Backster is also a teacher and it is through this interactive enterprise that Mr. Backster has been able to support his curiosity of nature.

A main question then arises: How could a man of this specialized background, that is–one who is not a botanist or plant physiologist trained in academic protocol–have the audacity to challenge the presuppositions of the established scientific community? Heresy, you say? Perhaps.

On that morning in 1966 did Cleve Backster have on his mind to prove that plants can preceive emotions? No!

After working on a polygraph technique for some hours he decided to take a break and water some of his office plants. Being a curious individual he thought it would be interestingif he could hook up his polygraph to a plant to see if he could determine how fast the water moved up the plant. A naive question, some might think.

He had not written a grant proposal or signed a contract for money with a preconceived notion of proving or disproving anything. He was not practicing grantsmanship, the common practice among too many scientists of the established community. Mr. Backster was just attempting to satisfy his innate curiosity about his natural environment.

The genius of his activity that early morning lay not in the statement of a problem or in the formulation of a hypothesis but rather in his perception of his environment and the recognition of the unusual. His mind had the ability to bridge the traditional presuppositions existing about plants at that time. He, in fact, was being creative in the scientific sense.

How was this „transgression'“ by an outsider taken by establishment scientists? As you might expect from a community of „open-minded“ scholars–it was mostly rejected. And I might add rejected without additional independent research of their own.

It sounds if I may be telling a story –from the history of science–that you may have heard over and over again. What about the reception of the unique ideas of Galileo? Coppernicus, Darwin, Dalton, Newton and Einstein? Do you see any parallels between their problems of initiating new ideas and those of Mr. Backster?

Are we falling into the trap of rejecting what is new because it doesn’t follow our present presupposition of plants and animals and their behavior? Perhaps. Is there, in fact, such a phenomenon as plant emotions? Perhaps there is.

And now may I introduce Mr. Cleve Backster.