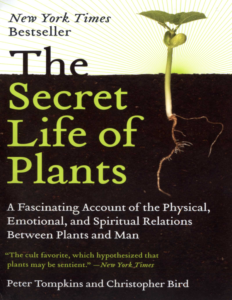 The leaf of his dragon tree showed an immidiate strong reaction on the polygraph atatched to it, when Backster decided to burn that leaf, before he actually went for a match: Could the dragon tree reading his mind?

Later, as Backster went through the motions of pretending he would burn the leaf, there was no reaction whatsoever. The plant appeared to be able to differentiate between real and pretended intent.

More than twenty-five different varieties of plants and fruits were tested, including lettuce, onions, oranges, and bananas: The observations, each similar to the others, required a new view of life.

This led him to hypothesize that the five senses in humans might be limiting factors overlying a more “primary perception,” possibly common to all nature. “Maybe plants see better without eyes,” Backster surmised: “better than humans do with them.” With the five basic senses, humans have the choice, at will, of perceiving, perceiving poorly, not perceiving at all. “If you don’t like the looks of something,” said Backster, “you can look the other way, or not look.

Looking with the Finale Theory knowlege to these experimental facts,  they are easy to explain, since all entities are spiritual entities, who exist only spiritually separated from each other within a spiritual space, which we call universe. The three-dimensional properties of space is only realized by the consciousness of all matter entities, including photons.

The primary perception of all matter-entities is perceiving the current state of mind of all other entities they have established „some kind of communication-session„. This communication does not require to travel any micron in space, because all entities living in the mind of the creator. Living in a separate chamber of his mind, we call universe. This universe is a zero-dimensional space where perception of any entity is immediate with any beat of its existence.

What sience should try to understand is the degree of freedom the various entiites have and to find out what goal this kind of entity has for life.