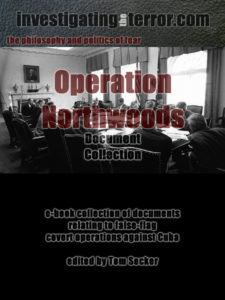 This collection of nearly 100 pages of declassified papers reveals the history surrounding the notorious Operation Northwoods.

The Northwoods plan called for US military and intelligence agents to carry out a series of false flagattacks, including terrorist attacks in US cities.

The events would be blamed on Cuba as an excuse for a military intervention. Though most aspects of the plan were never carried out, the history of how and why the operation was put together is fascinating and highly significant.

In April 1961 an army of Cuban refugees invaded Cuba at the Bay of Pigs.

They were armed, trained and equipped by the CIA, in an attempted coup d’etat against Fidel Castro. ‘The Beard’ had come to power in 1959, but relations between the US and Cuba quickly fell apart. A fuller account of the Bay of Pigs operation is the subject of a forthcoming e-book in this series.

Most importantly for the story told in this book, the invasion failed. The proxyarmy of refugees were either killed or captured. Out of this failure came Operation Mongoose – a much larger covert operation aimed at destabilising the Castro government before attempting to overthrow it. Northwoods was one particular twist in the history of Operation Mongoose, itself only one chapter in the history of US relations with Cuba during this period.

What these documents show is where Northwoods came from, both historically and operationally. They explain not only the Northwoods plan itself but also the psychological motivation and modus operandi of covert false flag attacks. Taking the documents in turn: