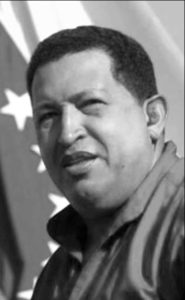 Although the controlled media painted the Latin American
strongman as“anti-American,”the truth is that Hugo Chavez was actually a forthright nationalist critic of the internationalist and imperialist forces of the New World Order.

From the time Chavez was elected president of Venezuela, the interlocking network of Rothschild dynasty-linked plutocratic families who dominate the Federal Reserve System and the American military-industrial-media complex—some call it “The Caiaphas Complex”—began conspiring against him.

Chavez knew the source of his opposition. In 2000, announcing a trip to Iraq, Chavez scoffed:

On another occasion he said:

Should there be any doubt Chavez was perceived as a roadblock in the way of the New World Order, consider the warning issued by David Rothkopf. In his book, Superclass: The Global Power Elite and theWorld They Are Making, Rothkopf spoke approvingly of what he called the new global “superclass”— that is, the New World Order elite — and said that the “political fault line” for the 21st century is the battle of “Globalists vs. Nationalists, ”that an emerging global network of antiglobalists”  stood opposed to the “superclass.” He wrote:

or opponents of the United States, or critics of Western-led globalization. . . . Whether you characterize it as nationalist vs. internationalist, populist vs. globalist, or anti-neo-imperialist vs. pro-American globalization, the fact is [the] battle lines are drawn.

Rothkopf named Chavez—along with Russia’s Vladimir Putin and Iran’s Mahmoud Ahmadinejad—as being among that “small group of leaders” challenging the New World Order, confirming that the primary underlying conflict today is — as it has always been — the fight by nationalists worldwide to preserve their nations’ sovereignty in the face of the drive by cosmopolitan internationalists to erect a global imperium.

Although Chavez is gone, other outspoken leaders — with the support of good Americans and good peoples all over the planet — still carry on his fight against the New World Order.