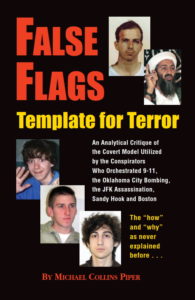 What We “Know” About Terrorism and Why (and How) We Know It . . .Prior to the 9-11 terrorist attacks, most Americans had little, if any, real knowledge or understanding of the concept of “terrorism.”

To the extent that Americans did know anything about terrorism, it largely arose from their recollection of media reports in the 1970s relating to the hijackings of airliners by Palestinian freedom fighters. But, for the most part, terrorism was essentially considered a “foreign” phenomenon and not one that particularly affected  mericans, except to the extent that someAmericans had been unlikely enough to be aboard a number of the airliners that had been hijacked.

And although the first attack on the World Trade Center in 1993, followed thereafter by the Oklahoma City bombing in 1995, did focus new
attention on terrorism—which was now making its presence felt right on American soil—Americans still essentially felt secure at home.

But 9-11 changed all that. Practically overnight, Americans from all walks of life became “instant experts” on the topic.Americans were now thorough-going authorities on “the dangers of Islam” and of the need to “stand by Israel.”Many Americans were absolutely convinced it was America’s God-given duty to wage war on the entire Islamic world.

However,despite the new-found American“popular”understanding of terrorism, the historical record demonstrates that the topic of terrorism was very much a focus of concern on the part of the Israeli lobby in America and that, at the highest levels of our national security establishment, pro-Israel forces were working relentlessly to shape policies (relating to terrorism) that were designed to advance Israel’s agenda in the Middle East and around the globe.

In 1989, Pantheon Books published a little-noticed volume that provides a stark and revealing look at the development and growth of what the authors dubbed “the terrorism industry.”

It is this terrorism industry that has been responsible—almost single-handedly and certainly in conjunction with the major media in America—in shaping what Americans “know” about terrorism (even if what we “know” is not precisely the truth).

In The “Terrorism” Industry: The Experts and Institutes That Shape Our View of Terror, Professor Edward Herman of the University of Pennsylvania and his co-author, Gerry O’Sullivan, provided a comprehensive and scholarly overview of the way that powerful private special interests (both foreign and domestic) have worked with government agencies in the United States and internationally to influence the way that the world looks upon the phenomenon of modern-day terrorism.

Although the authors did not focus exclusively on the role of Israel and itsAmerican lobby in the“terrorism industry,”it is very clear from their documented findings that Israel does indeed constitute a major player and has, from the very beginning.

According to the authors:“Many of the institutes and think tanks that are important components of the terrorism industry originated or grew rapidly as part of a major corporate offensive in the 1970’s.”

They point out that one of the key organizers and fund-raisers—a powerful public relations voice—behind this corporate offensive—was Irving Kristol who “succeeded in mobilizing a wide array of wealthy individuals, firms and foundations in the overall funding enterprise.”

Kristol, who once headed a front group secretly financed by the CIA, was a longtime leader of the influential NewYork chapter of the American Jewish Committee and the father of William Kristol, the much-touted “Republican strategist” who—as editor of billionaire Rupert Murdoch’s Weekly Standard—emerged (alongside his father) as one of the most influential of the pro-Israel neo-conservatives who were the primary architects of the American wars in Iraq and Afghanistan,all part and parcel,they said, of the over-reaching new“war on terrorism” that emerged after 9-11. It was the senior Kristol who was thus one of the prime movers behind a growing number of institutions devoting their resources to the study of“terrorism”—at least as Kristol and his associates defined it.

In The ‘Terrorism’ Industry, Herman and O’Sullivan have pointed out the Israeli connections of some of the more notable institutions known for their active engagement in analyzing and explaining terrorism:

With these institutions and others feeding “facts” about terrorism to the public, the media falls down on the job, according to Herman and O’Sullivan, by accepting without question the information (or is it “disinformation”?) on terrorism that the terrorism industry puts forth:

The transmission process is smooth, as the mass media pass long the manufactured messages without further substantial processing, functioning essentially as conduits.

The U.S. mass media have raised no questions about the premises and agenda of the terrorism industry and generally fail even to filter our or correct literal error.

Herman and O’Sullivan cite, as one example, a four-part series on “counterterrorism”that appeared in The NewYork Times on December 2, 3, 4,and 5,1984.The authors point out that the Times relied on Israeli officials and experts for about 20% of the information disclosed.The balance of those interviewed were largely U.S.officials and other “experts,” but the authors did not indicate whether the U.S. officials and experts included in the Times report had ties to Israel and its American lobby.

The authors indicate,based upon their findings,that there is good reason to believe that certain acts of“terrorism”are,in fact,artificially created to advance the agenda of those ostensibly fighting terrorism.They write:

Agents of the state,and those of private groups as well,may not only implicate terrorists from within terrorist organizations, they may urge them to commit terrorist acts to justify

WHAT WE “KNOW” ABOUT TERRORISM 25

prosecution. They themselves may carry out terrorist acts—attributed to others—for propaganda purposes. We believe that these actions are of great and underestimated importance.

It is not difficult for agents of intelligence organizations to set off a bomb or even to kill individuals, or to encourage or hire others to do these things; then to make a phone call claiming responsibility on behalf of a Red network or Palestinian organization. This is an easy way of creating a desired moral environment, and there is substantial evidence that states have frequently engaged in such practices.

The Israeli government carried out a number of terrorist bombings of U.S.facilities in Cairo in 1955-56,hoping that these would be attributed to Egyptians and damage relations between Egypt and the United States.

In the United States, the FBI has long engaged in agent provocateur actions, urging violence on penetrated dissident organizations and carrying out direct acts of violence, then attributed to the individuals and organizations under attack.

In our next chapter we will learn more about the so-called Lavon Affair—the aforementioned Israeli attacks on U.S.facilities in Cairo,a little-known story that says much about Israel’s historic record of utilizing “false flags” in its drive for regional (and global) supremacy.

So, there is much more to the business of “terrorism” than meets the eye,as Herman and O’Sullivan have pointed out.For this reason,Americans need to be wary of media reports about “terrorism” and to carefully consider precisely who is behind such reports.

In truth, much of what we think we know about terrorism has been generated in the think tanks, intelligence agencies, public relations groups and other forces that have been part and parcel of the international Jewish propaganda network that lends its skill to advancing the state of Israel.

And as we’ve noted, it is the mass media in the West—all of which is largely controlled by a tightly-knit clique of Jewish families and financial interests—that has helped propagate the legends (and “false flags”) that have been integral to promoting Israel’s agenda.

With this in mind, let us then move forward and take a closer look at the remarkable historical panorama—reaching worldwide—that demonstrates, beyond any question, that Israel (in particular) has an insidious record of utilizing false flags for its own insidious purposes.